We have lost a friend, a leader and a mentor….. 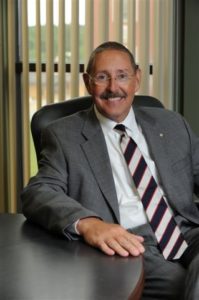 It is with great sadness that we share the news of the death of our friend and leader, Bruce Harris.  Bruce passed away peacefully at home Sunday morning following a long and valiant fight against cancer

All of us will remember Bruce’s positive attitude, his smile, his leadership, and above all, his example”, states Kim Barnes, President and COO of The Callaway Bank.  “Bruce shared with me many times that his desire was for the bank to move forward, grow, and remain strong and independent long past his tenure.  Because of that wish, the bank formed a plan of succession and transition that’s been in place for some time.  We are committed to honoring Bruce’s legacy by remaining an independent bank that supports our communities.”

A graduate of Fulton High School, Harris graduated with a degree in Psychology from Westminster College, Fulton, MO in 1976 prior to beginning his 36 year career at The Callaway Bank.  He was also a graduate of the Graduate School of Banking in Madison, Wisconsin.

“I did not keep a list of these things as they were numerous and I did not agree to work on those projects just to build a resume. If I did it, I did it because I believed I could help,” Bruce T. Harris, CEO, The Callaway Bank.

The Callaway Bank Board of Directors

Missouri Independent Banker’s Association, Past President and Board of Directors

Missouri Bankers Association, Board of Directors

Midwest Independent Bank, Board of Directors

Fulton Public Schools Foundation Board of Trustees and Past Treasurer

Callaway County Chamber of Commerce, Past Board member

American Cancer Society, Past Board Member

Serve, Inc., Past Board member and Chairman

Missouri Beta Chapter Home Association, Past President and Board Member

Fulton Country Club, Past President and Board Member