Is It Really Safe to Pay With My Phone? The Answer Might Surprise You

If you’re like most people, it might be hard to remember the last time you paid for something with cash. Credit and debit cards have long since eclipsed other payment methods, and research from Gallup indicates that the average American has 2.6 credit cards.

Lately, however, we’ve seen the rise of a number of new digital payment platforms. Apple Pay was one of the first, and because we rarely go anywhere without our phones, the idea has slowly been catching on.

But cybersecurity is a hot topic these days, with large corporate breaches and sweeping mobile device vulnerabilities appearing in headlines on a regular basis. And because paying with your phone involves storing payment information in a mobile wallet, many consumers understandably have questions about security.

Some of the most popular mobile wallets include Apple Pay, Google Pay, Microsoft Pay, and Samsung Pay, and contrary to what many people think, these payment methods are generally considered to be more secure than plastic cards. Cards feature an identifying magnetic stripe, and information can be stolen from it rather easily if criminals tamper with a card reader by adding a skimmer.

To combat this problem, banks are now issuing cards with security chips to prevent skimming. However, because many retailers have yet to incorporate chip technology into their payment processors, customers with the new cards frequently have no choice but to swipe and accept the increased security risk. In these instances, mobile wallets (also called digital wallets) can provide a safer option.

A digital wallet — such as Apple Pay — is even more secure than a chip card because it doesn’t use your actual card number for the transaction. As a security measure, your card information is only used in the initial setup of the wallet. Then, the wallet creates a token (think of it as a temporary card number) that is encrypted and used in place of your card number. The token number is not directly tied to your account, so even if someone were to hack into the merchant and break the token encryption, they wouldn’t be able to access your card or personal information. Additionally, the token isn’t a standard card number that could be used anywhere. It is specifically coded for each transaction, which makes it unusable beyond its intended transaction.

Mobile payment options also offer the added benefit of convenience, as almost everyone carries their phone with them everywhere they go. Transactions via a mobile device are frequently quicker as well. In one test that took place at a Subway in Los Angeles, Apple Pay took just one second, while a card swipe lasted 12. That 11-second difference might seem trivial, but when you’re standing in a long line at a coffee shop or grocery store, that time makes a big difference. Digital wallets can also be used for online or digital purchases, such as paid apps or subscriptions.

How to Pay With Your Phone

If you want to start taking advantage of digital payment platforms, you’ll need a phone that comes with near-field communication (NFC) capabilities. (This is similar to a Wi-Fi signal.) Fortunately, most devices released in the past few years come equipped with the technology. Once you’ve confirmed that yours is compatible, follow these steps, and you’ll be up and running with mobile payment in no time:

Apple phones will come with Apple Pay already installed, while Android users can opt for Google Pay or Samsung Pay in the case of a Samsung device.

After downloading the app, it’s as simple as entering the information of the card that you’d like to pay with. With some apps, this will be as easy as taking a picture of the front of the card.

Most apps will have users call their bank to verify their identity and confirm that they’re setting up mobile payment options. Be prepared to provide information only you could provide, like your Social Security number and the details of one or two of your most recent credit card purchases. (If iPhone customers are setting up Apple Pay with the same card associated with their Apple account, they might not have to complete this step.) 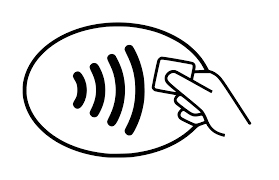 While not all merchants accept mobile wallet payments, a large number do. Look for this symbol on the card terminal. If you see it, you can use any mobile wallet.

When you make a purchase with a mobile wallet, you’ll position your phone so that it’s almost touching the card payment terminal. The phone will send a mobile token via the NFC signal, which the merchant then uses to process the transaction. For safety purposes, all mobile wallets require the user to first enter a password or use a fingerprint to access the platform. Thanks to this additional authentication requirement, you are still protected even in the event that someone steals your phone.

Mobile pay is catching on, and for good reason. It can be used for both credit and debit cards. The security and convenience of the new technology promise to change the way we make purchases, and mobile payments are one more step toward eliminating the need to carry bulky wallets. For your banking convenience, The Callaway Bank now offers Digital Wallets by Google Pay, Apple Pay, and Samsung Pay.

How To Fight Cardholder Fraud

Bank On It | Holiday Closing | News |

The Benefits of Shopping Local Ripple Through Communities

Introducing E-signatures During a Pandemic

Buying Your First Home: What to Expect

Any cookies that may not be particularly necessary for the website to function and is used specifically to collect user personal data via analytics, ads, other embedded contents are termed as non-necessary cookies. It is mandatory to procure user consent prior to running these cookies on your website.